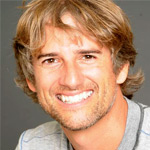 Matt grew up in the South and Midwest playing whatever sport was in season. Baseball, Basketball, Soccer, Football, and Hockey. He ran Track and played golf while at Wheaton College and graduated with a BA in Business/Economics. After a successful climb up the corporate ladder in the Minneapolis/Chicago area he gave it all up in search of his passion. He moved to California in 2001 and soon realized he was home.

Matt taught himself to surf and skateboard and then began practicing yoga. He quickly realized yoga improved nearly all aspects of his life, strengthening both his body and mind. Matt has earned over 1000 hours of yoga teacher training with Julie Rader through The Mukti Yoga School and is currently one of Mukti Yoga’s Senior Teachers. He enjoys sharing the transformational benefits of yoga through teaching it to others. Matt has been teaching for more than 10 years and teaches Vinyasa Flow as well as relaxing/restorative yoga and meditation. His students will attest to the amazing benefits they receive along with his calming and peaceful energy. His positive vibe inspires and encourages his students to live happier, healthier lives.

In addition to teaching yoga, Matt is a devoted husband and father of two boys. He also leads Yoga and Service retreats locally and around the world with his wife Chelsea, who is also a yoga teacher.

HIPS AND LOW BACK LOVE

This chakra yoga practice focuses on honing your intuition through various yoga postures designed to activate the third eye and crown chakras. Your 6th Chakra is your third eye chakra and your 7th Chakra is your crown chakra. Tapping into these two chakra's is all about connecting to your intuition as well as to your higher power. This chakra practice begins with meditation and pranayama and continues in a slow moving fashion. You are encouraged to practice with your eyes closed for as much as you can. Learn to trust your own inner-knowing. This all around slow flow will leave you feeling grounded and connected to both yourself and the Universe. Finish with a Chakra meditation.

BELIEVE IN YOURSELF YOGA FLOW

There is a famous quote by Henry Ford that says "Whether you think you can or you think you can't - you're right." This flow is designed to move through simple yoga postures to help you build confidence and ease in your practice. We will warm up with Surya Namaskara A and B and then a simple warrior two flow. This leads to the ground finishing with hip openers and a twist. So much of your success or failure in life depends on your attitude. See the good and believe in yourself.