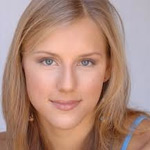 Ali is as zen as it gets. That's why her nickname, Ali "OM" is so fitting. And we love the calm, yet challenging vibe she brings to her classes.

Ali was first introduced to yoga while studying in the World Arts & Cultures program at UCLA. She spent her youth performing professionally as a dancer, but instantly became hooked on all the benefits of a yoga practice.

After graduating, she enrolled in a teacher-training program at the Yoga Collective in Santa Monica, CA. Since then, she has taught at numerous studios around Los Angeles including Bryan Kest’s Power Yoga, Yogis Anonymous, Cycleates, and The Hub. She is an accredited instructor for Ocean Yoga as well as the pioneer for the web based yoga series, Breaking Down Dog.

Ali has also modeled internationally for various yoga products including the Ocean Yoga Board and Lotus Yoga. Aside from teaching, she enjoys traveling and regularly coordinates workshops and yoga retreats to destinations around the world.

This quick tip gives you a few common poses prescribed to help alleviate pressure from the sciatic nerve. Sciatica can occur in the body for a number of reasons so please check with a medical professional to make sure yoga is an appropriate way for you to medicate the injury. We will go through a few poses to help open the hips, lengthen the psoas and lower back for greater mobility and flexibility through the area most commonly associated with sciatica.

One of the most common questions when first starting out: "How can I relax my shoulders?" The answer lies in this quick tip that will teach you the proper rotation of the arm bone in the shoulder socket so you can ease the muscles that line the head, neck and shoulders. This video will help you to feel at ease in poses such as down dog, warrior two, handstand and chaturanga. Enjoy!

Finding Position on Your Mat

Have you ever walked into a yoga class and found yourself scrambling to find your footing or understand how to place your hands? In this simple quick tip video we will walk you through a basic sun salute so you can place your hands and feet right where they need to be. Nothing calms a busy mind quite like moving efficiently through a vinyasa flow practice.